Two-Way Texting: Made in Mississippi

Apple Pays $23.6 Million Over the Foundation Technology for Transmitting and Storing Text Messages Which Was Covered by Patents Filed and Held by MTel in the 1990s.

Do You Text?
The cellular phone that is likely sitting within arm’s reach of you as you read this article doubtlessly has the capability to send email and text messages. It probably chimes and rings and buzzes multiple times a day alerting you that someone, somewhere, is trying to get in touch with you. Texting and sending mobile email are the norm, creating the expectation that everyone is (or at least should be) instantaneously accessible. Many of these standards of constant access are due to features like Apple’s iMessage and mail apps, which have made mobile text messaging communication effortless on their various AirPort-enabled and IOS devices. But before Apple staked their claim on these technologies, before sending a text became preferable to calling on the phone, paging was the latest breakthrough in communication technology.

Two-Way Texting Invented by SkyTel in Mississippi
Twenty years ago, paging technology was revolutionary. Here, in a little plastic device that would fit in the pocket of any elite executive or connected teenager, callback numbers and alphanumeric messages would appear. Paging allowed for instant communication and accessibility, laying the groundwork for being able to reach anyone at any time. One of the most significant technological leaps in paging, two-way communication that enabled one device to both send and receive messages, came from a company based in Clinton, Mississippi — SkyTel.

SkyTel was, according to their website, “the first company to offer nationwide numeric and text paging and the first with 2-Way messaging and guaranteed message delivery.” Under the watchful guidance of John Palmer, the Chairman of SkyTel’s parent company Mobile Telecommunication Technologies (MTel), and Jai Bhagat, SkyTel’s President and CEO, SkyTel innovated new technology that revolutionized personal communication with its comprehensive coverage and convenient-to-use devices. SkyTel went through various iterations under several different names in tandem with a number of mergers. The company was eventually aquired by WorldCom, whose filing for bankruptcy in 2002 was the largest in United States history, with $107 billion in assets. In 2006, SkyTel was acquired by Bell Industries. However, MTel has continued, throughout many of these transitions, to manage and operate SkyTel and the technology Skytel designed, which is still in use today. Although rarely used for recreational communication now, SkyTel’s two-way paging system is still present in hospitals and is frequently used by first responders to ensure timely communication in areas where cellular service is limited. 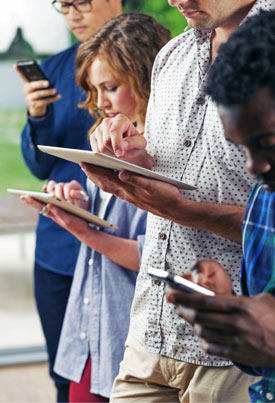 Technology Evolution
In the decades since SkyTel envisioned this technology, both the hardware and software by which we communicate have changed dramatically. These days, instead of having a phone and a pager, those technologies have been combined into the text features and messaging applications that are standard to cell phones and their smarter cousins. Rapidly changing standards in software and hardware impact the form and function of our devices. These swiftly occurring transformations in how technology is packaged and sent from one device to another have economic and legal implications as well. These implications come to the fore in court cases pertaining to patent law, an area of law that has, in recent years, become especially concerned with technology patents. So, despite some cosmetic changes, early paging technology remains integral to the function of personal communication devices of today, as one Federal Court of Appeals in Marshall, Texas, found in a patent case concerning MTel and modern tech giant Apple.

SkyTel V. Apple: A David and Goliath Story
The trial, which took place in November of 2014, consisted of MTel suing Apple over allegations that they have been using technology pioneered (and patented) by MTel’s subsidiary in the early 1990s. At their inception, SkyTel’s innovations in alphanumeric paging, international paging, two-way messaging, and text-to-voice messaging completely altered the landscape of personal telecommunication. But unlike the paging devices themselves, which have become practically archaic to most tech-savvy individuals, the programming that runs them is still relevant. In fact, it is foundational for Apple’s transmission and storage of messages in the company’s IOS programs and devices equiped with Wi-Fi and AirPort. Because MTel’s work had been patented, MTel had ample grounds for the suit they brought against Apple. In November 2014, the jury determined that Apple had used the technology without payment or permission and thus owed MTel a total of $23.6 million dollars in damages and reparations for patent infringement. In a statement to Bloomberg Business, Andrew Fitton, chief executive officer of United Wireless, called the win a “vindication” for all the work the engineers at SkyTel had done “way ahead of their time.”

A Place in History
This case, and numerous others like it, beg the question of how much technology really changes over time. Surely, new versions of computers, tablets, phones, and various operating systems will continue to be developed for the foreseeable future. But in this instance, technology that was cutting edge in the 1990s is still relevant to the devices we use daily. At its heart, personal technology is rooted in communication; through paging, texting, email, and all the other modes of communication we employ on our various devices, we are trying to communicate with others. And Mississippi is proud to have fostered the technology that makes those connections possible.