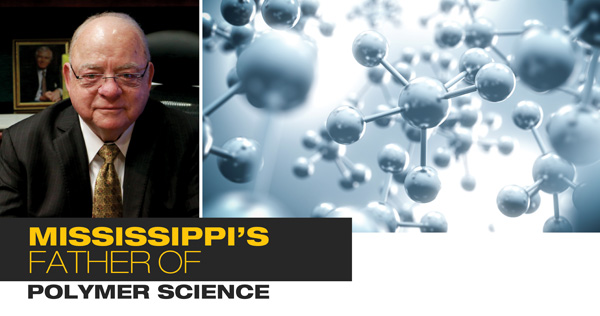 It is said that behind every great leader is a great partner. A partner that makes great sacrifices in the name and cause of that leader. A partner that demonstrates their commitment through their actions, putting the leader’s mission ahead of their own personal gains and interests.

The same might be said for great university programs. Programs that would not have risen to greatness without champions that pledged their ambition and tenacity to ensure the program would not fail, and would, in fact, be elevated to join and lead alongside the world’s best programs in their category.

For the University of Southern Mississippi (USM) Polymer Science Program, Dr. Shelby Thames is one of those champions.

Dr. Thames will recount the tales of the teams and individuals that made the polymer science program at USM world-class. Those teams will tell you how Dr. Thames inspired great action and never gave up on cause or direction. They will tell you that the program that is now world-renowned is on the map due in significant part to Dr. Thames.

A Logical Beginning
Thames earned both his Bachelor of Science in Chemistry (1959) and Master of Science in Chemistry (1961) degrees at USM, where he also served as a chemistry instructor while a graduate student. He was invited to be a Fellow at the University of Tennessee, where he earned his Ph.D. in Chemistry in 1964. After receiving his Ph.D., Thames was invited to return to USM as an Assistant Professor of Chemistry. In doing so, Thames joined with Dr. James Scott Long and took his first steps into the growing world of polymer science.

Tung Oil Legacy
Dr. James Scott Long was leading the Pan American Tung Research and Development League (PATRDL) that was tasked with expanding the uses of tung oil, which was a strategic material during World War II for making rubber without using rubber trees. After the war, Mississippi had developed a large crop of tung trees and needed a new use for tung oil as a resource, which is harvested from pressed tung tree nuts.

It happens that tung oil as a monomer has limited uses, but in polymerization it can be used in place of petroleum as a basic, fundamental source of raw material. Tung oil also has the benefit of being renewable and agriculture-based, which, especially in Mississippi, helps the farmer, the economy, and the balance of agriculture with industry.

Passing the Torch
Dr. Long became the Administrative President, and Dr. Thames was promoted to Vice President of Research for PATRDL. It was during this time that Dr. Thames dove headlong into polymer science, where he embarked on a self-taught journey of reading, research, and conducting experiments with a focus on emulsion polymerizations and solvent-borne polymerizations. His accomplishments and insights planted the seeds of a vision that would ultimately develop into a dedication and mission of creating a world-class polymer sciences program at the University of Southern Mississippi.

A Polymer Sciences Program in the Making
Dr. Thames began exercising a dedication for his developing research in polymer science. He and a team of bright-minded graduate students that were recruited to assist were conducting regular research and publishing results, while at the same time putting polymers to practical use in new products and emerging industries. By the early 1970’s, Thames’s team had identified approximately 400 companies involved in polymer sciences that needed help. He was developing a market for their research, and they were submitting proposals to help fund research and advance the field of polymer sciences in Mississippi.

A Shot in the Arm
Still working with minimal resources, Dr. Thames concepted and typed up a proposal for polymer research for the U.S. Army on carbon paper, including a budget, and mailed it. To his surprise and delight, on a Tuesday, Thames received a call from Dr. Ben Alexander of the U.S. Army who said he was potentially interested in funding the proposal. However, Dr. Ben Alexander had not heard of any research being done in Mississippi and was not even sure that the university existed. At Thames’s insistence and invitation, Alexander agreed to travel to Mississippi and see the facility in person. Some days later, Dr. Thames drove to New Orleans, the closest “real” airport at the time, and picked up Dr. Alexander.
As one might guess, Alexander had a very successful visit, and funding was offered.

The Wrench and the Fork
Polymer science was growing. Jobs were emerging, and a recruiter representing Deering Millikin, a growing textile company, reached out to Dr. Thames. As a result, Thames now had an Army contract in one hand and an offer to more than triple his salary in the other.

Clarity and Vision
Thames and his wife, Shirley, had a heart-to-heart conversation regarding careers, family, support, and home. In the end, Thames credits his wife for releasing him from the ties and obligations that money so often imposes and giving him the gift of freedom to choose a path and career where he could follow his passions and do what he loved — to teach and further build upon the foundation that was about to become the USM Polymer Science program. 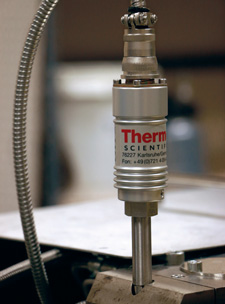 Recognizing Polymer Science
USM now had funding, equipment, and a need for faculty. Polymer science was officially launched within the College of Science and a faculty member was added. Graduate funding was leveraged to employ graduate students to fill the ranks.

In 1982, with instrumental help from Senator Thad Cochran in providing extensive federal funding toward the advancement of polymer sciences engineering, education, research, development, and commercialization, Dr. Thames was able to see his dream of establishing a technical center for polymer sciences in Mississippi come true by forming the Mississippi Polymer Institute. Since its inception, the institute has assisted hundreds of polymer science related companies

A History of Dedication
Over many years, Dr. Thames was asked to fill multiple roles, all the while caretaking the growing polymer science program. His roles included Chairman of the Department of Polymer Science, Dean of the College of Science, Dean of the College of Science and Technology, Vice President of Administration and Regional Campuses, Executive Vice President, and President before finally returning to a full time role in polymer sciences as a Distinguished University Research Professor, a position he loves dearly.

Some of the most inspiring stories about Dr. Thames come from the faculty and staff at USM, particularly in the polymer sciences programs where you will find faculty that studied under Dr. Thames at one point in their academic career. A former interim director of the Mississippi Polymer Institute, Dr. Robert Thompson, says Dr. Thames, through his leadership and the work he has done, is an inspiration to both faculty and students. Dr. Monica Tisack is the Director of the Mississippi Polymer Institute. She studied under Dr. Thames as an undergraduate over 25 years ago and has returned to her alma mater. She still has fond memories of her years at USM and studying under Thames, and other highly respected faculty. Says Tisack, “It’s unusual to find someone with a vision that works that vision for the number of years Dr. Thames has, and has the tremendous impact we still benefit from. We should all aspire to accomplish as much as Dr. Thames.” She credits her current livelihood to the work Dr. Thames has done for the Polymer Sciences program and USM.

Past to Present
Dr. Thames recalls the focus of the early days being the survival of the program, which was one of his incentives to stay. He recalls the work of Dr. McCane, who helped give the department a start and control over its own direction, as well as Dr. Lucas’s continued support. USM was the first to offer a Bachelor of Science in Polymer Science within its own department in the nation.
Today, USM has in its polymer science resources the Polymer Institute, The Accelerator (to accelerate the growth of startup ventures), the School of Polymers and High Performance Materials, Ph.D. Faculty, and B.S., M.S., and Ph.D. graduates.

Dr. Thames compares the evolution of the USM polymer science program to a three-stage polymerization reaction.

Stage 1: Start or Don’t
We started
Stage 2: Propagation
We put in lots of hard work
Stage 3: Termination
Now we have a thriving center for polymer science complete with a Ph.D. program

Dr. Shelby Thames officially retired after over 52 years of service. He still keeps an office at USM and still teaches polymer science. Says Dr. Thames of his fortuitous accomplishments in polymer sciences, academia, business, and politics,

“The harder I work, the luckier I get.”